I remember when Matt was little how important it was to find the right doctor. We had found a good one - a family practitioner who listened to me about my autistic son back in a time when no one had even heard of that diagnosis. I remember helping him understand my son a bit better: textures, light, sounds, etc., were difficult for Matt to endure, he didn’t respond to pain, he didn’t speak. All these things were as unfamiliar in their description as the diagnosis to his doctor. The physician learned from me what it meant to have Autism and be moderate / severe on the spectrum.

Those were scary times and illness was a wait and decipher game with real-life consequences. “Doctor, he’s not playing as much lately and sits still too much” was a symptom of something wrong and a call to action (and later found to be double pneumonia).

A lot has changed since then. Different insurance forced us to abandon a good doctor and pick from a list of unknowns. Who do we pick? Of course, Matt speaks now – not very fluently for the most part and has difficulty finding the right words, but he communicates. He seems to be the healthiest guy on the planet as he never complains about anything. He doesn’t take medications of any type. And when I suspect there’s a problem I go back to that super-sleuth mode and if I suspect a problem then Matt needs to see the doctor.

Now most, if not all, doctors have had some type of training in autism, but our recent experience with bringing him in to be checked by a doctor covering for his newly picked-from-the-list-doctor showed the information is skewed – and they treated him like a leper. That was detailed in a Transition Updates story, “Doctor Visit to Oz”.

What transpired forced me to reconsider the entire practice at that location and I went with recommendations for a new doctor, further away. First, I became a patient. I got know her (Dr. Amy) a bit and after feeling secure in her friendliness and willingness to be a “listening” doctor, asked her if she would be willing to see my son. She was enthusiastic at the prospect – an excellent sign! I then gave her a signed copy of my book, “Autism and the World According to Matt”, and made his appointment. She has a busy practice and we had to wait several months for the initial meet-n-greet. Yesterday was that day.

Matt was so sleepy when I picked him up. It was only noon and he usually sleeps until 6pm. He was up and moving and knew we were heading to the doctor’s but the combination of not getting enough sleep and meeting someone new was showing on his face. He was not thrilled about either. I threw in a trip to McDonald’s after the appointment and he perked up. Gotta love McDonald’s for still having that power to brighten his day.

As we drove over I went over the new visit with his new doctor – again. I reminded him of why we were going, and what was going to happen. I reminded him of his last doctor visit and his face immediately scrunched up as if he smelled something dead and rotten. “Not to worry, Matt” I replied, “I fired them!” Matt’s face lit up with a thousand points of light and he looked at me as if I were the most awesome mom on the planet! (Which of course, made my day spectacular, thank you!) I then went over with him the usual things that happen at the doctor’s office – BP, temperature, weight, height, and reminded him there would be no needles today. He was building confidence. I could see there was no real fear – a bit of apprehension (can you blame him after that last visit?), but he was doing well.

Finally we arrived and got checked in. Matt scanned a magazine and had just put it down when they called his name. Back we went, behind the mysterious doors that separate patient from medical staff. Matt walked in first. I was in “fly on the wall” mode. I saw myself as his interpreter only – and only if absolutely needed. This was all about him, all about how they would treat him. Would they speak to me or to him? Would they treat him like the man he is or the mute, non-thinking, non-human like they did at his last visit?

The nurse was pleasant but quiet, doing her routine of weight, height, and blood pressure. She didn’t alter her routine in either direction – not over the top sweet or leper-handler…. Just a nurse doing nursey things. She put the blood-pressure cuff on and the automatic pump kicked in. She went to zero the scale a few feet away. Matt’s face revealed the intensity of the pressure he felt on his arm as the cuff inflated and I talked him through it, “It’ won’t go any higher, it’s starting to come down now, it’s almost over” and I noticed a light bulb went off for his nurse – her face said it all. She didn’t know Matt was autistic. As she listened to me talk with my son I could tell she was studying my voice and watching my son. She smiled at him more, talked a bit softer and not so hurriedly. She asked him if he knew how tall he was and Matt said “No”. So now it was time to measure. Gentle, slow, calm…. Yep, you are a quick study, dear nurse.

“70 inches”. She stated. Matt looked at me as he stepped off the scale.

“Oh!” he replied and smiled back.

We were escorted to the exam room. As soon as the door shut Matt walked to the exam table, hopped up and reclined. Guess he just needed to lie down a second…..

Then there was a short knock on the door and in stepped his new doctor, Amy. She greeted me (as I was in the direct line of sight) and then saw Matt all stretched out on the table. Her hand immediately came forward as she introduced herself to my son, “Hi Matt. It’s nice to finally meet you!” Matt smiled – looked right at her face – and extended his hand. (Awwww…. My heart was moved seeing Matt hold her gaze like that. Geez… autism parents get a kick out of the tiniest of things, don’t we?) 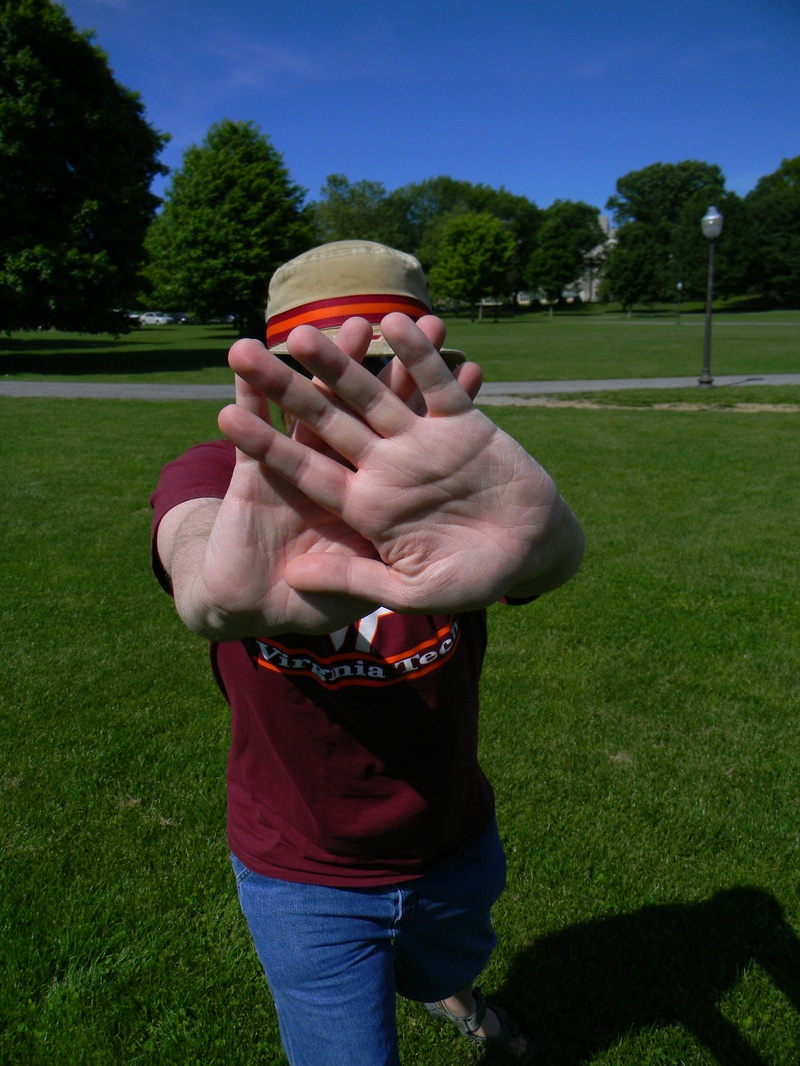 And so began a conversation between the doctor and her patient. I could tell she had read the book as she knew exactly what topics to hit to make him at ease. She didn’t look at me – she looked at my son. When she asked HIM about cooking Matt gave her his entire list of things he cooked for himself. She asked HIM about his hobbies and activities. She asked HIM about his life. And Matt replied, on his own, to each and every question. He talked about VT and photoshoots and walks. His voice was light and happy, and even though his words were difficult to produce and he stuttered greatly, he kept at it, never giving up. He was determined to be heard. When he stuttered his hands came into play, using hand gestures to convey his desire to communicate, to help him speak . . . . and the doctor LISTENED.

She never finished not even one sentence for him. She waited as he struggled and found his voice and she smiled and conveyed a relaxed body language, never once rushing him to just finish talking. She was impressed with his successes, and she told him so – and Matt beamed. It was a conversation between a patient and his doctor… a real conversation. It was everything I could do to just watch – without jumping up and doing a happy dance.

As you can see, we left yesterday feeling successful and happy. Matt was excited to know that he only had to go to see his doctor once a year – unless he got sick. He was happy with this new doctor – and claimed her as “HIS”. He felt comfortable and his emotions were wonderfully expressed in his walk, his body language and the lightness of his voice, each conveying volumes about his experience. Matt would be just fine with Dr. Amy . . . heck, more than just fine.

It’s difficult being a parent of a handicapped child when people who need to interact with your child are rude or show apathy, or worse, treat them like they are contagious. It’s hard switching doctors because you are looked upon as someone hard to please, drug-seeking, or a hypochondriac. But it is all worth the effort when you finally get exactly what you are looking for, exactly the right match for your child. Matt can’t doctor-shop for himself … it’s up to me, the parent, to do that. If that means I get a reputation as difficult to please, then so be it.

It is all worth it when you see a relationship start to bud that you know will blossom with time. I will not always be on this earth to do be Matt’s interpreter. It is a heavy weight on my shoulders knowing that my son can’t always communicate what he needs all by himself. I am praying that I remain on this earth until Matt can do it all on his own. Isn’t that what all parents really want?

But I got a glimpse of the future yesterday . . . In time, my son will be able to tell his doctor everything she needs to know, all by himself. I know it. I KNOW it.

Seems that the goals we set for our children are mostly long-term goals – and even longer-term for our autistic children. This was one of those goals and it has now finally been set upon the right road. I am thankful having discovered Dr. Amy, and I feel a weight is slowly lifting off my shoulders. More importantly though, an even bigger weight has lifted off Matt’s shoulders, because it is Matt who feels he has finally found the right doctor – one who sees him for exactly who he is.