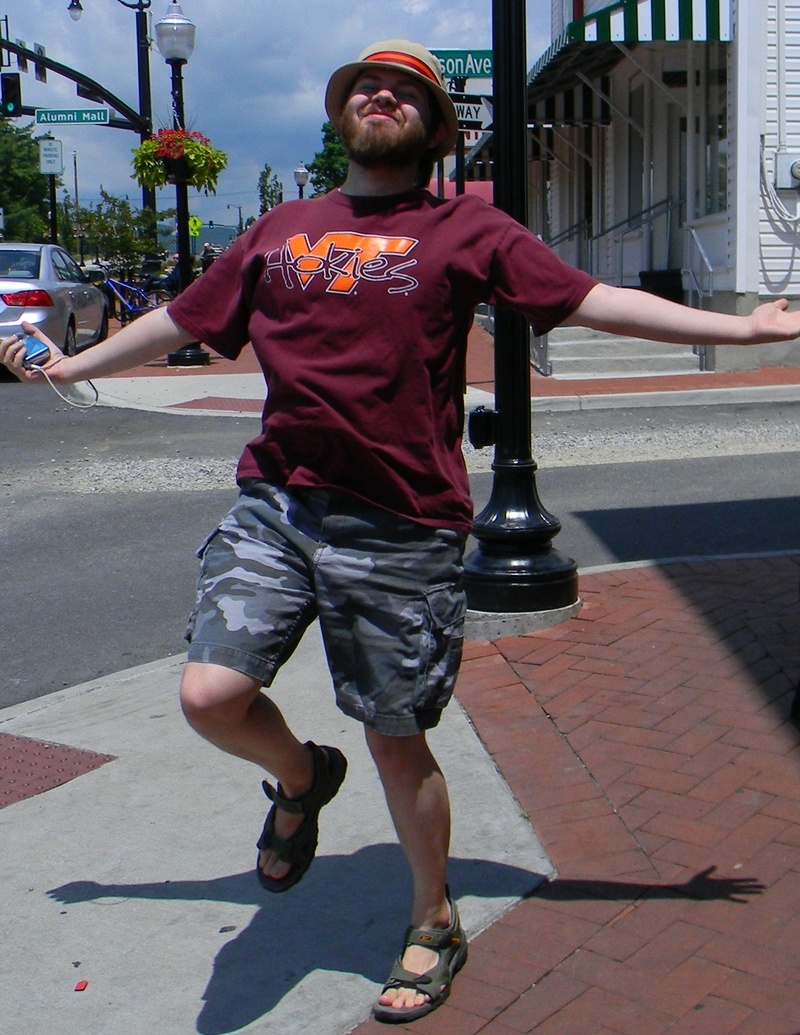 Matt spends only one night at my house per week now... what a huge change from a year ago.  The next day he gets up, plays a bit on guitar hero and then packs his bags and heads down the hall where he waits for me to hear him, knowing I will ask him if he wants to go home and in doing so will only need to reply in one word, "yes".

Matt speaks to me this way.  He waiits for me to figure it all out, then ask and then he can reply.  Matt can not initiate speech.

Earlier today we changed that ..... I think.

I was sitting at the computer reading an article and I hear the sounds - very light footsteps in the hallway, accompanied by the sound of roller-wheels (the kind on Matt's overnight bag). I wait. I don't look up, and I don't speak.

A few minutes later I hear the steps again -just a slight shuffle, and he stops again. Matt is waiting for me to turn around, read his intentions (his bag is packed and he's ready to go home), but again I don't turn.... I wait.

A few minutes later I hear the next small shuffle.....then he stops again.

"Matt? Are you trying to tell me you are ready to go?" I inquire, already knowing the answer.

Matt comes out to the bar where I am sitting, walking with sure, determined footsteps, and stands in front of me. "Uh, yes."

I go on and explain to him that what he was doing was allowing his autism to take control, making him wonder if he should speak, would he be bothering me, trying to be cautious, making him afraid to initiate speech with me, his momma. I told him that I knew in my heart that he was not afraid of his momma... that he knows how to speak to me and that he knows I will listen, it's okay to interrupt me, no matter what I am doing, if he needs to tell me something.  I said that when he felt unsure again, felt hesitant and wanting to wait, to try and remember that he need not ever fear conversation with me. . . . ever. I will always want to hear his voice and I will always stop to listen.

His reaction to this little bit of motherly advice was priceless.  He lit up from head to toe - a light-bulb just went on - and a gigantic smile graced his beautiful face as he leaned in to hug me.

Something clicked - something big. Was it that his tentative pace in the hall, his waiting for me, his old routine of awaiting to be invited to speak, was acknowledged as his autism?  Was it the realization that he could change that routine?  Was it that he knew he didn't need to fear initiating speech with me?  Has an old habit based in fear and routine been broken - or at least fractured?

I want to think so. The look - a very obvious "oh!" kind of look that signals when something has been understood with absolute clarity, is one a teacher constantly looks for in her students - this was one of THOSE looks, and I recognized it immediately.

I am so very anxious for next weekend now - to see if he just struts down the hall, straight over to me and comes right out and tells me he's ready to go.... what an awesome moment that will be.

Of course, it might not be that simple.  Seems like nothing in autism ever is . . . but what if?  What if next week, or soon after, he does initiate speech for that one little thing - ready to go home to his place.  Matt is maturing in everything he does - and this maturing has sped up considerably since the move to his own apartment.  Even if it doesn't happen next week I know it will happen soon - I know because I saw it on his face. It's starting to dawn on Matt that he can be in more control, if he pushes just a bit more, just a little harder, past that fear of initiating speech, he can do this.

He knows I'm in his corner cheering him on.  He knows I guide, I suggest and I push a bit here, a bit there, but never hard.  He is where he is because I do - and Matt knows this.  He trusts me.  And I know that look I saw tonight (which sent shivers right through me) was the start of something new, something wonderful, again.

Maybe he realized that his mom was right - that I would always turn to listen, always stop what I am doing to respect his voice, and he need never fear an interaction with me. Maybe it was the realization that he could fight his autism - the parts of his autism he doesn't like.