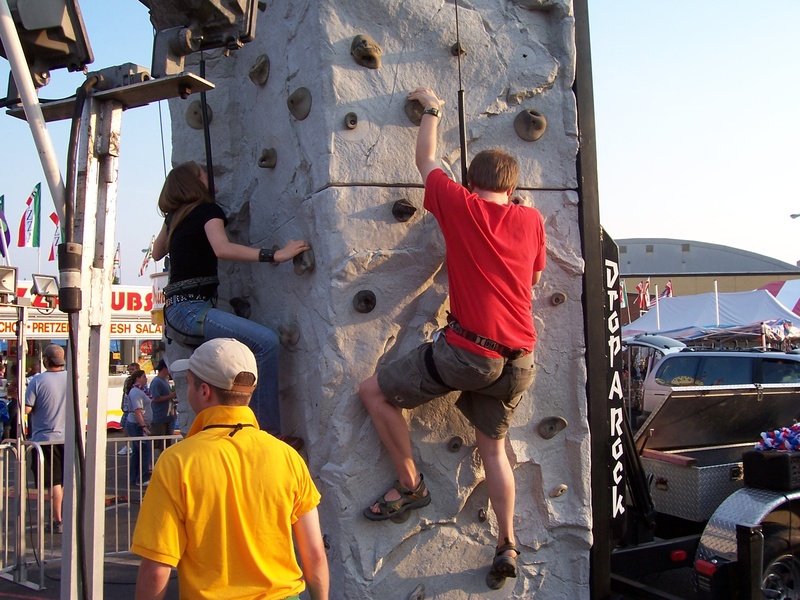 We have certain routines for holidays. The Fourth of July is my favorite. First of all – it’s warm. Any holiday that heralds the glory of summer has to be one of my favorites. Second – we always go to the Salem Fair, a place that holds many great memories of our children growing up. Third - I love fireworks. I always look so forward to Fourth of July.

One of those memories involves 4 small children and 2 broke parents. Raising 4 kids isn’t easy financially. In the beginning we were always struggling to save money. Our first trip to Salem was to simply watch the fireworks – we couldn’t afford the fair. We had an old van back then that smoked terribly when we idled at stop-lights or were trapped in a traffic jam. Our old van held all of us fairly comfortably. I say fairly because it was missing the back bench seat. Jacob and Sarah sat on the first bench seat and Matt and Christopher sat on the floor where the second bench seat should have been. Matt is my youngest and he is autistic. That first trip to Salem to watch the fireworks was a spur-of-the-moment trip. We weren’t sure where we were going or where exactly we would be pulling over to see the fireworks, we just went. We stopped and picked up chicken dinners and drinks and headed for the big city. We drove around awhile and found a factory parking lot that faced the direction of the fireworks, pulled in and awaited night fall. The fireworks were amazing. It turned out we had a front row seat. Matt was especially thrilled. He covered his ears for the “boom” but he was captivated by the patterns the sparkling light made in the night sky – and he was hooked. Each year thereafter we had to go to Salem to see the fireworks on the Fourth of July.

As the years progressed we got better at the finances and soon we were taking the kids to the fair itself for a day of rides and pig-races and taste-testing samples of the latest snack foods. Matt wanted to ride the roller coaster – after all it looked sort of like a train (it had a long winding track) and the track was laid out in various spirals, which I’m sure Matt thought made very cool patterns. He bounced as he waited in line. The roller coaster was one of those kiddie-coasters and only meant for really small children. It didn’t even go very fast. Matt was larger than the other kids that rode with him, but he smiled just as big. He went on a few other rides, but mostly he avoided them. Some were just too scary-looking to attempt. He watched his brothers and sister scamper toward every ride – fearless, and although he wanted to ride too, his fear forced him to be a spectator only. This changed slowly over the years. Each time we went, Matt seemed a bit braver and would attempt a new ride.

Weeks before the holiday each year, Matt would start the countdown on the calendar. Each day he would announce how many days until our annual trip to the Salem Fair. Each year we exposed him to something new. One year we had all the kids enter the art contest. Their pictures were on display for all-the-world to see for the entire week of the fair. Matt won one of those contests years ago and it helped to boost his self esteem tremendously. This was during the same year as his big win at Special Olympics. Man, did he love those blue-ribbons! It was also during a time that Matt was fascinated with weather and especially tornadoes.

In this particular year, Matt had chosen to go on some of the rides that were previously feared – like the giant ferris wheel. This ride towered above all others. Instead of a bench seat it carried gondolas, allowing 6 people to ride together, round and round. It moved slowly and of course it stopped us at the top. The gondola swung back and forth. I hate heights – but love the view, and just kept telling myself, “Don’t look down”. As a result, my eyes focused on the mountains in the background and the dark sky in the direction of our home. Matt was also looking toward home. “Uh oh . . .” he said softly. “Don’t worry, Matt” I said to him, “Those clouds are pretty far away.” Matt kept looking homeward and announced, “I think it’s a supercell.” Supercells are cloud formations that produce tornadoes. He didn’t say it fearfully or even as a possibility – he stated it as fact. We all turned our gaze toward the dark clouds. Matt knew his weather. We looked at each other. Matt was right about such things and we wondered, ‘Was there a tornado near our home?’ The wheel began to turn again and at each stop downward we looked at the clouds. The storm drew closer, but as we watched it move along the mountain ridge we knew we were only going to catch the edge of the storm. It began to rain.

We waited out the storm indoors. This was where the booths were set up to sell various items, where the artwork was displayed, and where “headliner” shows were performed. We walked slowly around to each booth and then stopped to watch one of the shows featuring acrobats. The sun re-emerged and back outdoors we went, straight toward the petting zoo. Matt stood back and watched as we fed the animals. We told him what each animal was and that they wouldn’t bite. Yet, even though he could see we were all enjoying the animals, Matt remained fearful.

The fireworks display was on time. It turned out to be a great day and great evening. Tired and sunburned, we packed up and headed for home. It was late when we returned home – and the house was still standing. We were relieved when we didn’t see any wind damage. The next morning as Tom and I had our coffee and listened to the news we found out that a tornado had touched down just outside of Wytheville and they were showing pictures of the homes damaged by the large hail that preceded the wind. Matt had been right again – it really was a supercell he spotted from the ferris wheel.

The years flew by and the Salem Fair changed. They took away the fireworks display as companies near the fairgrounds began to complain of a fire hazard. This meant we needed a new venue. The town of Wytheville had actually increased their display and it’s close to home. Our new routine is to watch the fireworks in town, but we still go to the Salem Fair during the day. The rides seem smaller and the price tag bigger, but we go because, well, it’s our routine. Matt still tries something new each trip. He did a bull-ride one year and let an artist draw a caricature of him in another year. Just a few years back, Matt attempted to climb the rock wall. He didn’t make it very far and I could see on his face that he intended to conquer this wall within the next few years. We still walk through the petting zoo of small exotic animals at the fair, but now Matt actually hand-feeds the emu. And we still ride the giant ferris wheel to take in the magnificent view.

So, what’s the point of this story?

First – everyone has routines. One of the characteristics of autism is the need or desire for routines. I need certain routines – don’t you? Autism just increases the number of obvious routines, but routines in and of themselves are nothing new – we all have them. Second – Routines can provide a measuring stick for noting changes in behavior. Matt became more incline to do something new each year – new rides, feeding the animals, sitting for a picture, and climbing the rock wall. These were all significant because it showed he was maturing and his independence was gaining strength. Third – Connections can be made. Matt connected his knowledge of weather to the cloud formation he witnessed and formulated a conclusion – the tornado. This is the application of knowledge – a crucial step in the road to critical thinking. Fourth – Routines provide an avenue to work through fear. He knew where we were going and what to expect and could make plans to conquer specific fears as all else was the same. It allowed focus. Matt worked through his fear of fast rides, his fear of crowds, and less fear meant more focus on trying something new.

The only thing hard about routines is getting one started. Once you have it in place you can use it as a tool in teaching the autistic individual. It doesn’t feel like work, and certainly doesn’t feel like teaching, yet a routine may be just what you need.

I wrote that story in April of 2010 with summer just around the corner.  Now when I re-read it I think of how wonderful the Christmas holiday season is for starting routines.  With Christmas coming up and holiday demands increasing it is easy to lose sight of the simple joy in a family routine. This year why not start a new one? Design a fun routine that you can enjoy every year - one you build on and use to see progress.  Something simple as a mall trip or a game in handing out gifts on Christmas morning can be more powerful than you realize.  Life gives us ample opportunity to develop, engage and learn from routines - afterall, there's no better classroom than life itself. Enjoy your routines!