Enjoying a day on the university campus 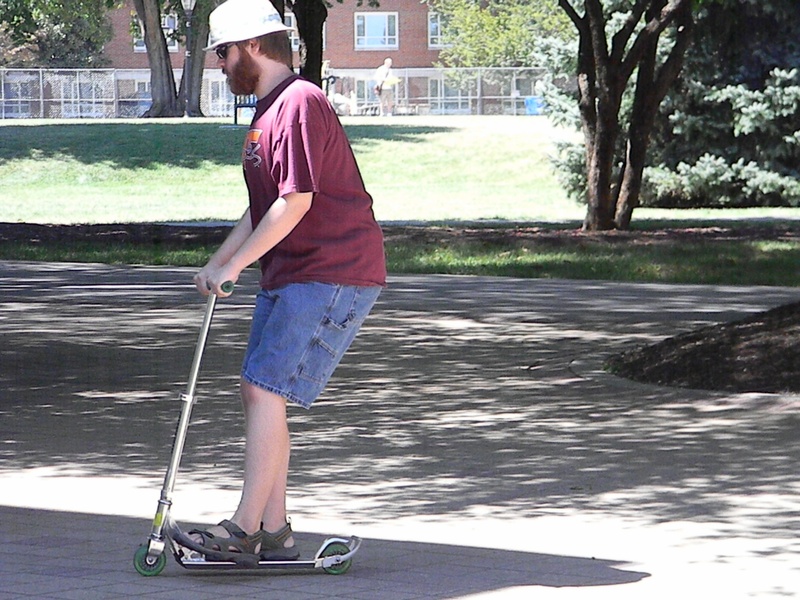 Matt had been looking forward to it for weeks.  When I told him I would be teaching a class at my alma mater Matt immediately expressed his desire to go with me.  Of course, Matt wasn’t interested in sitting in on my class.  He was excited about exploring the campus.  Matt loves exploring college campuses.  Radford University is one of his favorites –mostly because he remembers when I was a student there.  He knows the science buildings rather well.  Matt had gone with me several days prior when I signed my contract, paid for parking and did all the little things that come with a new hire.  He had to checkout the bookstore, the fountain, and get a Mountain Dew from one of the many vending machines.  We talked about how different the campus looked after so many years.  New buildings had sprung up in almost every corner, spreading the college to what seemed twice its size.

Tom was still home when I started my teaching days for RU.  His new job was still a week or so away (in Montgomery, Alabama) and he was delighted to hang out on campus with Matt while my class was in session. We agreed to meet at the jeep at 3:00pm.

After class I walked to the jeep.  It was still a few minutes before 3 and the guys were not there yet.  I put my book-bag in the jeep and glanced around.  I recognized Matt’s hat right away.  Tom and Matt were sitting in the shade at a small patio behind the science building.  As I called for them they looked up and waved.  I knew immediately that their time on campus had been enjoyable – Matt was smiling ear to ear, an excited swagger to his steps meant he was feeling good – really feeling good –about who he is. I love that look.

I heard about his purchase of an RU t-shirt from thebookstore, his leisurely ride on his Razor scooter between Young and Porterfield Halls, and his sketches of the campus.  I couldn’t wait to see his sketches.  Matt loves to draw buildings. Each time we take Matt to Virginia Tech he draws a different statue or building.  It’s apparent Matt loves the architecture.  On Radford University’s campus he drew one of the older buildings, the McConnell Library. Tom told me they sat in grass in full sunlight with a straight on view of the library.  Unfortunately, the day was quite warm, rather hot in the full sun and Matt was getting hot. Uncomfortable but determined, his hands flew across the page and within 5-7 minutes had drawn McConnell Library and expressed his need to find some shade. Wow, 5-7 minutes.  I couldn’t draw my first line in that amount of time, much less a rough draft of the whole building! I was amazed – as always – of his artistic ability, and congratulated him on a job well done.

I really wish I could convince Matt to take a class – especially an art class.  Alas, Matt is leery of classes.  He hates exams and has an awful fear of failure, though I suspect there is something much deeper going on in his mind.  I see it on his face and in his eyes. I think the un-named fear is that someone will tell him to do it differently.  Matt has his own way of doing everything and although he takes suggestions very well (not that he follows them every time) but he takes criticism – even constructive criticism –poorly.  The best remarks upon improving technique would be seen as insulting. His art is his art.  There is not an artist in the world, regardless of how admired, that could put a grade on his art.  To Matt, all of his art is deserving of an  A+, even the drafts.  If he improves upon a drawing it is because it is requested gently, for reasons other than neatness of the lines or depth of the shading.

I can sometimes get Matt to improve a work of art if I request it from a different angle.  I looked at his beautiful rough draft and thought how great it would be if he had done it in pen.  The striking contrast of  black ink on white paper would really make the details stand out.  Yes, I made the request.  His face scrunched – as if I had just insulted his ability. I explained that I wanted one to put on this web site and that it would show up better than the pencil draft.  He thought for a moment and decided my motives were pure enough to do one for me in ink.

This is why Matt doesn’t bother with art school.  He fears criticism.  He would need a facilitator for explaining the demands of each course and his facilitator would have to know just how to phrase each comment on technique.  I wish I could be his facilitator, attend his courses and re-phrase each instruction so that Matt would feel at ease, feel that higher education was exciting and enjoyable and not just one demanding chore after another.  I can’t – I have to work to pay the bills like everyone else I know.  But wouldn’t it be great to really help Matt to go down a different road?  An education in art would bring out new renderings of architecture that he could sell, make a living at, and help him to live within his own little niche.

Matt has been drawing now for almost 45 minutes.  He didn’t redraw the sketch. Instead, he inked over it, improving this line and that. He took his time, he concentrated on the original piece of art, and true to his nature, never changed the essence of the picture.  The black on white contrast is eye catching.  I knew it would be. I uploaded both to “Matt’s Art” page of this site so you can judge for yourself.

As parents we always want the absolute best for our children.  We want their dreams to come true, taking precedence over even our own dreams.  It is more so when the child is autistic.  They need an extra boost, some additional support, and more focus on the future to see their dreams fulfilled. Our other children are in charge of their own futures now, but Matt’s future is quite dependent on me.  So even though Matt will not take another college course this year, there’s always the possibility for next year.  Until then, Matt will continue to acclimate to the college atmosphere as long as I keep encouraging him to come along.  And, I will continue to make gentle suggestions about his art in an attempt to alleviate his fear of criticism.  One day soon it will dawn on me how to persuade him to try a new technique, take up a new medium or subject matter in an attempt to broaden his horizons.  Until then, I will continue to be astounded at who he is now.